I was diagnosed at age 18 while in my first trimester of pregnancy with my son in 1995. The journey to diagnosis was not an easy one, as is for many with myositis. It took many doctors to figure out what was wrong with me. Finally, a perinatologist actually diagnosed me and this is how I got to that diagnosis.

I had seen doctor after doctor with symptoms of fatigue, muscle weakness/pain, along with skin rashes. They all told me that I was pregnant so I should get used to not feeling well. Finally due to intense pain, increasing rashes and not being able to move, my mother took me to the ER. The doctor ordered a bunch of labs and then actually discharged me before one test was back, my cpk. All my other labs they checked were normal. The doctor told me, once again, you’re pregnant and gonna need to get used to being “tired.”

I was scared, angry and frustrated. Why couldn’t they help me? I knew something was very wrong. I even felt like maybe it was all in my head since the doctors all say the same thing. My mother helped me get dressed and out to the car. She literally just helped me into the front seat when the doctor came running out and said to get me back into the hospital.

When I got back in, the doctor explained that my cpk was almost 14,000 and I needed to be admitted. Of course, then come the questions of what does that mean and what is wrong with me??? The ER doctor couldn’t answer. Rheumatology, nephrology, cardiology, infectious disease, among other specialty consults, were called in. Over the next week none of them could tell me what was wrong, though. I was beyond scared at this point and worried about my baby as I was only about 8 weeks along. The only thing ever said to me was the rheumatologist commenting “let’s hope it’s not polymyositis.” Finally, after a week of being admitted and only getting IV fluids and Tylenol, the nephrologist discharged me since my kidneys were good and they couldn’t give any other medicines as I was still in my first trimester. They arranged for me to see the perinatologist upon discharge. So there I am, feeling even worse, scared out of my mind, and no diagnosis.

Within days after being discharged from the hospital, I met with the perinatologist. It was recommended that I do selective reduction with one fetus. I decided against that. That decision led me to my diagnosis. The doctor was very up front and told me I very well could die, lose my baby, or both. I went forward knowing the risks and that I may never know what was wrong with me or live to find out. I honestly did not think I would live. The perinatologist consulted with many of his colleagues in different specialties, many different tests, ultrasounds, etc. were ordered… and then it happened. I WAS DIAGNOSED with polymyositis, that nasty word I heard back in the hospital… Now what? The doctor followed polymyositis with another scary word I never heard before, dermatomyositis.

He explained that due to my severe rash, the type of myositis I had was dermatomyositis and I would need steroids as soon as I got into my second trimester. FINALLY, I knew what was wrong, but came to quickly find out there was not much information available at that time. My perinatologist saved my life and my son’s with his persistence and dedication to diagnosing and treating me.

I started high dose prednisone at the start of the second trimester and continued through delivery with bolus dose at delivery. I went into preterm 3 times–first time at 28 weeks. Each time labor was stopped. I went for ultrasounds, labs and nonstress tests all the time. I was at a doctor, lab and hospital a few times a week. There was growth restriction noted, decreasing amniotic fluid (with no leaking) and also placenta was degrading quickly. Doctors then tried inducing me, but it failed. I then had one more ultrasound, and it showed barely any amniotic fluid. It was then decided, emergency c-section. That cry was the most beautiful thing I ever heard. My son was born that evening in January 1996. He was healthy and, minus some jaundice and extremely dry cracking skin from lack of amniotic fluid, he was perfect.

I was lucky and did not flare during my delivery, which is what doctors thought would happen. My cpk gradually declined throughout my pregnancy on 70mg of prednisone. At the time of delivery, my level was normal, finally.

Five years later, in 2001,  I had a set of twin girls. That pregnancy was complicated as well but I remained in remission during that time. Prior to that pregnancy, I met with the perinatologist and discussed a plan of what to do in preparation to have another baby. I was lucky enough to remain in remission throughout that time. Once I spoke to my doctor and we had a plan, I got pregnant about a year later. Because I was monitored extremely close, I found out at 8 weeks that it was twins. I was blessed with healthy twin girls in June 2001.

I’ve had lung, heart, gastrointestinal, thyroid and liver involvement over the years. I’ve had flares off and on both with and without elevated cpk. I work full time as a medical assistant; my medical issues made me want to help others who were sick. I’m now 42 and have been a dermatomyositis warrior for almost 24 years. I hope sharing my story will help someone else out there going through the same thing find hope and not feel alone. There is so much support now with the internet as compared to 1995 when I was diagnosed and I literally felt completely alone.

By the way, I am still in touch with that perinatologist who saved our lives.

Hello, I was diagnosed at age 18 while in my first trimester of pregnancy with my son. Took many doctors to figure out what was wrong with me. Finally, the perinatologist is who diagnosed me. It was recommended that I do selective reduction. I decided against that. Started high dose prednisone start of second trimester and continued through delivery with bolus dose at delivery. My initial cpk was near 14,000... I had seen doctor after doctor and they all told me that I was pregnant so I should get used to not feeling well. Finally due to intense pain, increasing rashes and not being able to move, I was taken to the ER. They actually discharged me before one test was back, my cpk. Doctor came running out and said to get me back into hospital. I had a very complicated pregnancy but ended up delivering a healthy boy. Five years later I had a set of twin girls. That pregnancy was complicated as well but I remained in remission during that time. I’ve had lung, heart, gastrointestinal, thyroid involvement over the years. I’m now going through another phase where my liver has been affected and am awaiting further evaluation and testing. I work full time as a medical assistant, my medical issues made me want to help others who were sick. I’m now 42 & have been dealing with this for almost 24 years.

MSU on a mission

Our mission is to improve the lives of and empower those fighting myositis through education, support, awareness, advocacy, and access to research. 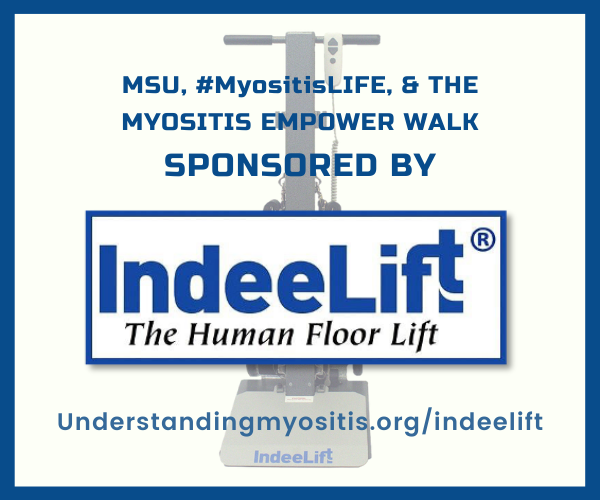 Don't have an account?
Sign up
Back to
Log in
Back to
Log in
Choose A Format
Story
Formatted Text with Embeds and Visuals
Video
Youtube, Vimeo or Vine Embeds
Meme
Upload your own images to make custom memes
Image
Photo or GIF

Send this to a friend